Click here to check out some other of my videos and to hear more samples of my Flamenco repertoire.

Discover the ‘Duende’ of the Flamenco Guitar. Metronomes and notation can’t reveal the magic of flamenco – it just has to be listened to and enjoyed. That’s the excitement of a live performance.

I have studied with two of the best known international flamenco guitarists, Paco Peña and Juan Martín and have a great passion, understanding and love of this unique art form. 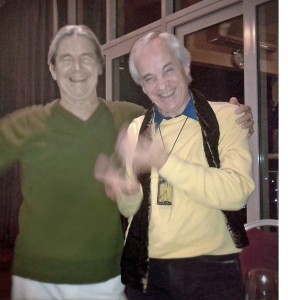 Me and Paco Peña at a Christmas Party hosted by The London Guitar Studio at the Holiday Inn, Camden Lock, London, 8th December 2012.

Flamenco – a brief history
Flamenco originated in Andalucia, Southern Spain, and was influenced by the various peoples who passed through or settled there. Among those different cultures were the Jewish, Moorish and Byzantines, whose styles were integrated in the song and dance of the Andalucian people. Andalucia was under Moorish domination for many centuries, therefore its music already reflected the oriental influence.

During the 15th century many tribes of gypsies found their way to Andalucia, living mainly in the fields, nomadically and in poor conditions.  They had remarkable facility for rhythm and music and in Andalucia they found a rich, colourful folklore of great poetic charm.

So, there are two main elements in Flamenco – Andalucia, with its old musical background, and the gypsies.  Without both Flamenco would never have existed.

It is not known exactly when it all started because there are very few written records available.  There are three main periods in Flamenco’s history.  The first, from the early 1800’s to 1860, where it was part of the life of Andalucian gypsies and the poor people.  They kept it for themselves and never performed outside their communities.  The second phase was from 1860 to 1910 – this was the era of the “Cafes Cantantas”, special ‘Tablaos’ or places wholly dedicated to Flamenco music. The third and most recent phase, from 1910 to now, is when Flamenco emerged from its original environment to become known throughout the world.  No evidence exists that guitars were used during the first period but as Flamenco evolved, the guitar, which was already the instrument of Spain, was brought in to accompany the singing and dancing.  Paradoxically, it is the guitar as a solo instrument which has made Flamenco popular world wide. 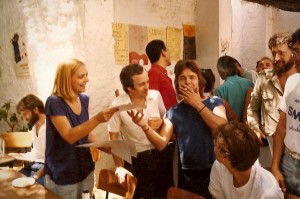 Me in Cordoba – many moon’s ago – receiving my certificate from Paco and his wife Karin on the last day of Paco Peña’s Flamenco Guitar Masterclass.

Click here to check out some other of my videos and to hear more samples of my Flamenco repertoire.